Promotional Products Association International (PPAI) seeks to recognize the industry's top companies through a series of prestigious awards that honor creativity, ingenuity, and excellence in promotional marketing. Award winners are considered the best of the best in the promotional products industry. ePromos is proud to have received the following PPAI awards:

Since 2008, Counselor, the b-to-b magazine of the Advertising Specialty Institute (ASI), has surveyed employees of promotional products companies to determine the best businesses to work for in the industry. Winners are determined on the basis of employees’ responses in 10 different categories. ePromos employees have spoken – we’re consistently one of the top places to work in the promo industry. 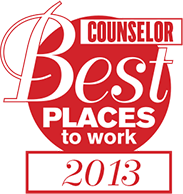 See some of the other accolades we’ve received: