December, the most wonderful time of the year. December is full of celebrations, magic (especially for little ones), and the official start of winter. In the U.S., a large majority celebrate Christmas or Hanukah, but there are many additional reasons to celebrate (see below!). And while those holidays are religious-based, there is the universal and ceremonious celebration of New Year’s Eve – the official end of the year! A time for reflection and jubilation. 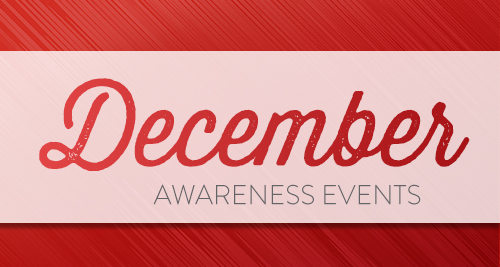 December is also a great time for your brand to get involved in a cause. As described above, people are already in the holiday spirit and ready to celebrate. But the holidays are also a time for heightened compassion, gratitude, and a willingness to give back to those less fortunate. Additionally, many businesses take hiatus, or at least slow down, during the last week of December. This may be a great time to slow down your business and focus your energy on doing something volunteer based. We’ve got a handful of holiday and awareness days listed below. Check them out and see which might be the right fit for your brand. Should you decide to join any of these causes, let us help you enhance your campaign by adding promotional products to it.

The holidays in December are not only magical, they are serious too. From Christmas to New Year’s Eve to Hanukah, there is no shortage of celebrating this month. While New Year’s Eve is an inclusion holiday for all cultures and ethnicities, most holidays this month are either religions or cultural-based. With that in mind, Christmas is widely celebrated by both practicing Christians and non-Christians, who simply celebrate it for the tradition. Depending on your brand’s audience and cultural connections, it may be a great opportunity to join in on any of these celebrations, so long as it’s done respectfully and mindfully of any cultural/religious “rules.” Below, we’ve provided a brief description of the main holidays in December, with links for deeper reading.

• Christmas – Christmas is a mega holiday. So much so that nine out of 10 Americans celebrate it. Originally a Christian celebration of Jesus’ birth, today many people celebrate, for both religious and non-religious reasons. It’s steeped in tradition that includes Christmas trees, caroling, gift-giving, feasts, stockings, and more. Christmas takes the spotlight in December. It is also a big time for charity, including toy drives, volunteering, and generally just trying to be kinder to those around you.
• New Year’s Eve – One of the widely celebrated holidays in December that isn’t faith based, New Year’s Eve is held December 31. A night for revelry, most people gather with friends and family to eat, drink, and be merry as they ring in the New Year at midnight. Fireworks, the Times Square count down, and making New Year resolutions are all part of the celebrations for many people around the country.
• Hanukah – Hanukah, or Chanukah, is an eight-day celebration in the Jewish religion. It celebrates the rededication of the Second Temple (or Holy Temple) in Jerusalem during the second century B.C., which happened because of the Jews revolting against their Greek-Syrian oppressors. Known as the Festival of Lights, Hanukah is celebrated with the lighting of a candle each night on a menorah, special meals, games, and gifts. The actual dates of Hanukah vary each year, as they go by the Hebrew calendar. It begins on the 25th day of Kislev on the Jewish calendar, which occurs sometime between late November and late December. In 2019, Hanukah starts on December 22 and ends on December 30.
• Kwanzaa – A celebration of life that takes place annually from December 26-January 1, Kwanzaa is an African-American holiday that first began in 1966. It celebrates seven principles of African heritage: Umoja, or Unity; Kujichagulia, or Self-Determination; Ujima, or Collective Work and Responsibility; Ujamaa, or Cooperative Economics; Nia, or Purpose; Kuumba, or Creativity; and Imani, or Faith. The week-long celebration culminates in a feast and gift-giving.
• Las Posadas – A Hispanic and Mexican celebration prior to Christmas, Las Posadas takes place from December 16-24. The nine-day celebration honors the journey Mary and Joseph took in the Christian religion, leading up to Jesus’ birth. Widely celebrated in Mexico, it is also celebrated in some areas of Latin America, including Cuba and Guatemala, and by some Hispanics in the United States. Each country has their own unique take on the celebration, but it typically involves a procession that includes singing songs and traveling from house to house looking for lodging as a way to reenact Joseph and Mary’s journey. One house, the final one in the procession each night, is the posada, or inn.

December has several medical awareness days that may be appropriate for your brand to promote, particularly if you are in the health, wellness, or medical-related field, such as a hospital, research, or pharmaceutical company. Here is a handful of awareness days with a brief description of each to help determine if joining in on any of these days fits your brand and messaging. If you do opt to join any of these campaigns, we suggest reaching out to the organizers, or incorporating some of their communications pieces (many have available toolkits) into your work to ensure you are representing the cause accurately.

• World AIDS Day – Celebrated on December 1 since 1988, World Aids Day is an opportunity to spread awareness of the AIDS pandemic and also mourn those who have passed from the disease. This day is observed around the globe due to the widespread reach of HIV and AIDS. It is an important awareness event, as over 1 million people live with HIV in the U.S. alone, and of that number, about 15 percent don’t know they are infected. Globally, an estimated 37 million people live with HIV/AIDS. Spreading awareness of this devastating disease is key. December is also AIDS Awareness Month.
• Seasonal Depression Awareness Month – Seasonal depression, also known as seasonal affective disorder (SAD), is estimated to affect about 10 million Americans. The cause? The long, dark days of winter. There are many things individuals can do to help treat the symptoms of SAD, and simply being aware of it is an important first step. Seasonal Depression Awareness Month helps to raise this awareness during the month of December, the start of the winter season.
• Influenza Vaccination Week – Held during the first week of December, Influenza Vaccination Week seeks to raise awareness about the importance of getting your flu vaccine every year. According to the CDC, few people get vaccinated after the end of November, perhaps assuming it’s “too late”, but the CDC is eager to spread the word it is not too late – at any time – to get the vaccine. Getting it later in the season is better than not getting it at all, which is why they are eager to spread the world through this awareness week, and hopefully increase vaccination rates.
• Hand washing Awareness Week – In 2019, December 2-8 is Hand washing Awareness Week. Hand washing is one of the easiest ways to keep yourself from getting sick and stopping the spread of germs. While this is important year-round, the winter season is notorious for colds, the flu, and the onslaught of many other illnesses, making December the perfect month to remind everyone just how important it is to always wash your hands thoroughly.
• Cancer-Related Fatigue Awareness Month – Cancer is a brutal disease, and one of the most common side effects of those either going through it, or have had it in the past, is fatigue – a constant feeling of tiredness that inhibits one’s ability to do normal, daily activities. Even more troubling, it can reportedly last months or even years after cancer treatment ends. Cancer-Related Fatigue Awareness Month in December aims to spread awareness about this draining side effect, and let people know it is quite different than normal fatigue.
• The American Lung Association Christmas Seals Campaign – This campaign has certainly stood the test of time. Starting in 1907, the Christmas Seals Campaign sold stamps at the post office to raise money for a sanitorium that treated tuberculosis, the leading cause of death in the U.S. at the time. Since then, its mission has spread to raise money for the American Lung Association, and the myriad of lung-related diseases it represents. The campaign continues to sell theme-oriented stamps every year in December. You can check out their gallery of stamps, which date all the way back to their beginning in the 1920s.

Check out these additional awareness days, which may be a nice fit for your brand and another reason to celebrate and/or raise awareness one last time before the year closes.

• International Day for the Abolition of Slavery – For Americans, the concept of slavery is something of the past, but around the globe an estimated 40 million people live in what is called modern slavery, a term that encompasses forced labor, forced marriages, and child trafficking for example. All these may also occur in the U.S., so this isn’t just a foreign/international issue. Celebrated on December 2, International Day for the Abolition of Slavery is an opportunity to raise awareness about the horrific truth of modern slavery, open conversations about it, and find ways to combat it.
• International Day of Persons with Disabilities – Observed on December 3rd annually, International Day of Persons with Disabilities was founded by the United Nations in 1992. It aims to “promote the rights and well-being of persons with disabilities in all spheres of society and development, and to increase awareness of the situation of persons with disabilities in every aspect of political, social, economic and cultural life.” Each year has its own unique theme. In 2019, the theme is “The Future is Accessible.”
• Human Rights Day – Human Rights Day, which is held annually on December 10, marks the start of Human Rights Week. This day celebrates the rights of all humans – for simply being humans — and champions equality, justice, and human dignity for all.
• National Drunk and Drugged Driving Prevention Month – December is a jovial time full of celebrations for many of us, but it is also unfortunately the month of the most drunk, drugged, and impaired driving accidents occur. This awareness campaign is a sobering reminder of the dangers of overindulging in substances and getting behind the wheel.
• Identity Theft Prevention and Awareness Month – The abundance of holiday shopping makes December a prime month for identity theft. Identity Theft Prevention and Awareness Month, held annually in December, seeks to raise awareness of how individuals can better protect their identity when shopping, and hopefully avoid identity theft not only during the holiday season, but all year long.

And that concludes the December holiday and awareness events! We hope that by reading through these you’ve been able to brainstorm ways your brand may connect to any number of these suggestions and join in on the celebrations or awareness-raising. December is truly a month to celebrate (if nothing else, most people get some time off from school/work!) – why not get your brand in on the merrymaking or to give back? And when you’re ready, be sure to reach out to us here at ePromos.com so we can set you up with some promotional items to really enhance these events. Our knowledgeable team is available to help you at every step of the process, from brainstorming, to choosing an item, to graphics, and more. Give us a call today! 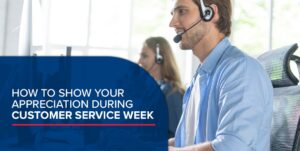 How to Show Your Appreciation During Customer Service Week
Brianna Yahner 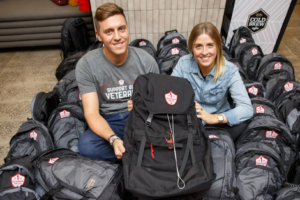 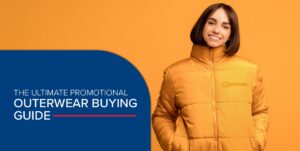